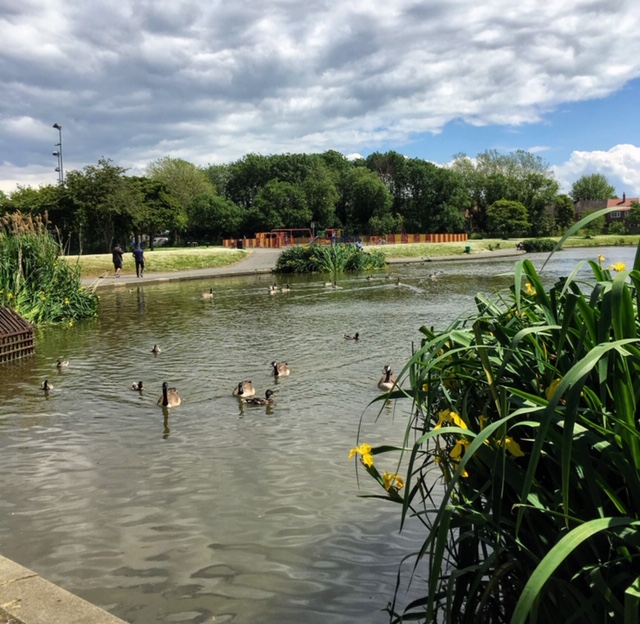 I arrived in England in early May, a little later than Browning’s thoughts at the start of his poem but certainly well in time for blossoms and birdsong. In fact, one of the things that I’ve been most enchanted by, staying at my mother’s house close to seemingly unstoppable airport expansion but on the edge of a blessedly still wild field, has been the constant trilling of birds. They go at it all day. I’m fairly useless at recognising the birds who entertain me so, but Mum tells me the loudest and most persistent is the blackbird. I think I’m able to distinguish a thrush too and some days we have visits from a collared dove with its gentle deep-throated coo.

Yesterday, Mum and I went for a walk through our neighbourhood and after stopping by the pond to watch the various water fowl waddle, peck at bread thrown by eager children and sail by, Mum told me about the time before the park was created. She described a large field, untended and bordered by tall nettles, dandelions and buttercups. She said that though it wasn’t at all picturesque, it nevertheless offered a place to sit on a spread blanket with a flask of tea and a few biscuits and perhaps imagine being in a more salubrious setting. A break away from the daily round.

These days, the park is a generous stretch of green, lush with mature bushes surrounding the pond which is home to mallards, Canada geese, moorhens, coots and sometimes, swans. Families play games and feed the birds there everyday. The grass areas are perfect for games of “footie”, there is an actual football pitch over on one side and the playground has been entirely re-modelled with equipment that satisfies 21st century mores around child safety.

I don’t remember at all the pre-park days and when I read its history I learned:

The site was originally farming land until the late 1950s. Its function then changed to a landfill site which in time was grassed over to form a mound. In 1962 the site was handed over to the council and an artificial lake constructed to serve as a holding pool for surplus flood water from the nearby Baguley Brook during severe rain storms. Painswick Park was officially opened 1968. The lake is stocked with a variety of fish and used by local anglers.

Its opening in 1968 was great timing for me as a mid-teen in the late sixties, in need of a place I could retreat on Sunday mornings, away from the curious gaze and questioning of parents, to sit on a bench and gather myself together from the hangovers I suffered after my Saturday nights out with friends, dancing my hopeful hippy heart out at school dances, illegally entered pubs and discos in Manchester. I have no idea if the pond was home to so many birds then as my eyes were mostly closed, catching up on lost sleep.
Sharing Painswick Park with Mum, when we are are both at such different stages of life, is an entirely new experience for both of us. I don’t think we ever went there together as it came into being when I was past my playground days. We have so much more in common now. Both women past menopause, we have our bodily changes, aches and pains to deal with. We have, each of us, spent many years of our lives with partners who are no longer in our lives. Mum has lots to remember and sustain her from her 68 years of marriage to Dad before he died. I look more to the future as I move on from a divorce after 30 years of wedded not-always bliss. We are learning, once again, the fun we can have together whether it be listening to the music of my childhood or Mum’s era or walking round the pond being entertained by all those birds.

I
OH, to be in England now that April ’s there
And whoever wakes in England sees, some morning, unaware,
That the lowest boughs and the brushwood sheaf
Round the elm-tree bole are in tiny leaf,
While the chaffinch sings on the orchard bough 5
In England—now!

II
And after April, when May follows
And the white-throat builds, and all the swallows!
Hark, where my blossom’d pear-tree in the hedge
Leans to the field and scatters on the clover 10
Blossoms and dewdrops—at the bent spray’s edge—
That ’s the wise thrush: he sings each song twice over
Lest you should think he never could re-capture
The first fine careless rapture!
And, though the fields look rough with hoary dew, 15
All will be gay when noontide wakes anew
The buttercups, the little children’s dower,
Far brighter than this gaudy melon-flower!

Today, I push you to the park.
Wheelchair resists the slope,
I lean in, listen over your shoulder,

sky                       drifts
between island clouds,
sun finds open water.
Your hand escapes your blanket,
reaches toward Canada geese
pulling their goslings in their wake
to water’s edge and bread tossed
by wide-eyed children.
Coots and moorhens want their share,
flap about on stick legs,

We sit by tranquil water
and you recall days before
the building of these lawns
spread with the spring snow of daisies,
before run-off was channelled into a pond,
water iris planted, (now waving yellow flags).

I liked to walk out, just sit here in the field…

ragged grass, tall nettles, thistles and hawthorn.
You escaped kitchen, kids, wifedom.
This place-apart for you
to lay a blanket, lean back,
stretch out your legs,
pour tea from a flask, raise a cup
to blackbirds and sparrows flitting
tree    to     tree.